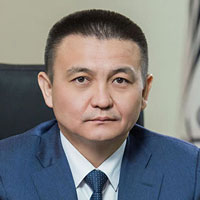 Chairman of the Board, Member of Board of Directors
National Mining Company "Tau-Ken Samruk"

Since 1990, more than 65% of all deposits in Kazakhstan have been discovered by junior mining companies. The adoption of the Subsoil Code creates favorable investment conditions for the emergence and development of such companies. Tau-Ken Samruk sees the prospects of mutually beneficial cooperation with junior companies, which will contribute to the development of the entire mining and metallurgical industry of Kazakhstan.