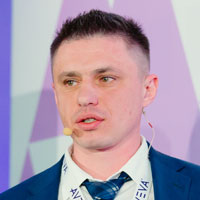 In 2001 Sergey graduated from the South-Russian State Polytechnic University (NPI) where he qualified in engineering in chemicals industry.

Sergey started his career in TNK-BP where he worked in the role of key automation engineer for 5 years. Since 2006 until 2010 Sergey worked as project manager in Indasoft company.

In 2010 Sergey became Sales Executive for Wonderware Russia, and since 2014 until now he performs the role of Key Account Manager in AVEVA.