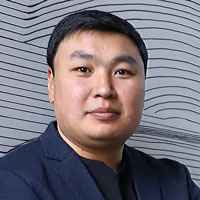 Bachelor of engineering and technology
* Kazakh University of Economics, Finance and international trade (2009)

Academic titles, degrees, and activities:
* Master of science, thesis topic: "Forecasting the needs of preschool education in Astana until 2030" (2011)

* Manager, head, Staff of student construction teams and labor groups "Zhasyl El" in Astana (2005-2007);
* Deputy Director for development, branch of PTP Vector LLP, Astana (2008-2012);
* Project Manager, Deputy Executive Director, national Association of mining and metallurgical enterprises (2012-2015);
* Head of the Secretariat Of the Committee of mining and metallurgical industry of the Presidium of the National chamber of entrepreneurs of Kazakhstan "Atameken" (2015-2016);
* Adviser to the Chairman of the Board of the state Corporation "Government for citizens "(2017-2019)
* Managing Director, Corporate Fund "international Technopark of IT startups" Astana Hub "(from June 2019)

Cooperation with the International Technology Park of IT startups

Report on the activities of Astana Hub in the development of domestic IT products for the mining and exploration industry.