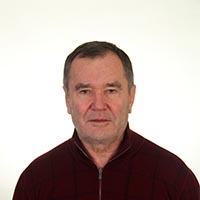 Georgiy M. Trigubovich created a new technology of electromagnetic scanning, which is widely used to solve geological, engineering-geological and hydrogeological problems: developed a new generation of airborne geophysical helicopter exploration platforms, which determine the direction of development of airborne geophysics at the present. Now he is engaged in the development and implementation of three-dimensional EM surveys technologies of TEM, MTS.

The 3D-software system for processing of airborne TEM and ground areal observation systems data of large volume is based on numerical 3D-modeling of electromagnetic fields and model-based 3D-inversion. It allows reconstructing a geoelectric model of the medium, considering rugged terrain with variable thickness of laterally inhomogeneous layers and target objects of a complex shape. Reconstruction is carried out using 3D-block structures with moving block boundaries, considering curvature and variable thickness of the layers, and complex shape of target objects. Both “continuously” changing electrical conductivity of the host layers and boundaries of individual 3D-target objects and large geological structures are reconstructed simultaneously during 3D-inversion. 3D-inversions with rotations of block structures shows if detection of the target object against the background of many other inhomogeneities is stable or unstable.

The system was tested with an observation system with ~200k positions of the airborne system, where ~10k parameters were used to reconstruct the medium when searching for polymetallic ores and kimberlite bodies under traps. 3D-processing required ~500 hours of computer time in a system containing 128 cores.
The system has unique capabilities for reconstructing geoelectric 3D-models from airborne data over large areas, as well It is useful when creating large training samples for machine learning systems based on artificial intelligence.